The RVBA Hosts The Region’s Nonprofits

COTTEKILL – The Rondout Valley Business Association is back and burlier, while also more community-concerned, than ever. At least that was the unmistakable takeaway from last Thursday morning’s breakfast gathering at the Rondout Municipal Center, filled to the brim with area business and government leaders, artists and farmers, and representatives from a majority of the valley’s major not-for-profits, whose contributions to the region’s vitality was the morning’s main topic.
“This is your building; it’s owned by the taxpayers,” said Marbletown supervisor Michael Warren as everyone admired the artwork and visible outside beauty in the new Blackboard Bistro. “This is also where we store all the food for our community food banks.”

“This is a hub for all our communities now,” added Rosendale supervisor Jeanne Walsh. “It’s 99 percent utilized.”

As everyone in attendance introduced themselves, there were updates on the rail trail, given a new spurt of activity in Wawarsing; about the upcoming SUNY Ulster graduation of over five hundred and this past Wednesday’s busy Hudson Valley Giving Day, as well as for all that’s underway as the canal museum in High Falls expands into the neighboring Depuy Canal House.

RVBA president Richard Travers spoke about how the morning’s focus on nonprofits came out of discussions last autumn, where some at a meeting of the region’s town supervisors were heard decrying lost tax incomes.

“I started thinking, later, about how these institutions add to our economy, and to our lives,” Travers said, later. “We thought we needed to get the story out about everything nonprofits bring to the table.”

The ensuing discussion’s moderator, Ulster County comptroller Elliott Auerbach, noted a recent study his office had done on nonprofits in the county. There were 2,300 altogether, of which 185 were in partnership with the county providing some $20 million in services. And that, he added, was just the surface of valuation.

“We have an $18 million budget with a payroll of $8.2 million. One of the values we bring to the table is that we’re really quick with our emergency room visits; the best in New York for the seventh year… and ten years of profitability,” noted Ellenville Regional Hospital CEO Steve Kelley, the first of four to speak.

Kelley noted other areas where ERH has gotten ahead of larger academic medical institutions, working to redesign and better various systems, including the way opioid abuse is handled.

“We are the tip of the spear,” he concluded before heading off to another breakfast meeting.

Ann Kalmbach, co-director and co-founder of Women’s Studio Workshop in Rosendale, talked about how she started what’s become a world-class institution with a million dollar budget back in 1974, fresh out of art school. The place was built on residencies, then the careful addition of tools and accompanying expertise in things like papermaking, bookmaking and ceramics.

“We realized, a few years ago, that at least half of our residents come from overseas. That’s real cultural tourism,” Kalmbach noted. “There’s great value in such tourism in that cultural tourists have been found to spend way more than your average tourist… Why, we have six times as many nonprofits and seven times as many art stores as Westchester County!”

For the Local Economies Project’s Farm Hub, former Marbletown supervisor Brooke Pickering-Cole outlined the encompassing New World Foundation’s focus on creating a more resilient food system that could battle corporate food production’s “detrimental effect on public health and the environment.” She spoke about Local Economies as a granting organization intent on “changing the food system, and adding to the viability of farms that were more local and adaptable to markets and climate change.”

Of the $3.5 million given out to date, she added, most had gone directly to farms and farmers for training, support and food access. Some went to Community Foundations for local food pantries, and also to local schools for better food options at lunch. The Farm Hub, she added, was deeply involved in crop research, trainings, but also the maintenance of its 1,250 acres in four townships, employment of fifty people full and part-time, and public farm stand… all while paying taxes and not using any pesticides.

Finally, Joe Alfano of Mohonk Preserve spoke directly to the difference between profit companies and nonprofits.

“Nonprofits are a business in service to a mission, and not just to profits,” he said. “I like to know every day I go into work that what I do will have an impact on my community.”

Alfano went on to speak about how important it was for places like the Preserve to inspire caring for the environment, especially given the challenges of Climate Change. He pointed out to his institution’s fifty-year history charting weather and climate effects on the species in its purview, providing invaluable data on changes affecting us all. In addition, he noted how the Preserve provides educational opportunities, a tourism destination for over half a million each year, as well as jobs and invaluable search and rescue training, and expertise, for the entire region.

Talk about a breakfast full of champions… and grand, meaningful ideas and their actualization. 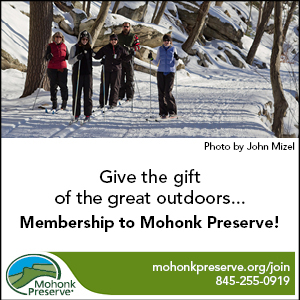